The user profiles are available below by clicking on the names of the students to expand the information. 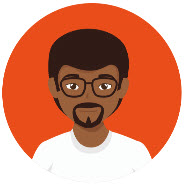 Programme of Study: UG in School of Pharmacy

Saleem uses BSL as his main form of communication. Lip reading also helps his understanding.  He always has captions switched on when watching videos or TV.

Saleem finds Apple’s accessibility features make things much easier. He uses WhatsApp to communicate with friends and family who sign.

He’d like video captions to make sense - sometimes they’re terrible and don’t help his understanding at all.

It’s annoying for Saleem when captions just say things like ‘music playing’ and don’t have the song words. It’s even better when they have different colours to show different people speaking.

If there are no captions, transcripts are ok.

Saleem doesn’t like his friends having to make phone calls for him. He appreciates alternative methods of contact such as text and email. 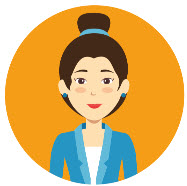 Programme of Study: PhD student in the IoE

Simone lives with her husband and two sons in Reading. She works full time as a SENCO at a large primary school. Her work informs her research. She was diagnosed with dyslexia two years ago.

She often calls on a colleague to proof-read reports or academic work as she worries about her spelling.

Simone uses specialist dyslexia software which reads out documents and web pages for her. The software helps her feel more confident about her writing.  The colour highlighting feature helps her mark the important bits if there’s a lot of text.

She uses a smartphone and enjoys listening to audiobooks.

Simone wants to feel more confident using technology – she doesn’t like asking for help (although her family and work colleagues are always supportive).

Simone isn’t keen on online chatting in academic contexts. She worries about her spelling and writing quickly enough. She finds the speed of the chat in busy webinars difficult to keep up with.

She finds it hard to concentrate when there is a lot of text to read, or  things are moving on a page e.g. banners, tickers or fast-moving text. 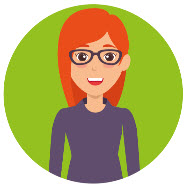 Ashleigh is partially sighted, having lost much of her sight in her teens due to a genetic condition. She uses a screen reader to help her read web content.

Ashleigh has been using JAWS screenreader for about eight years. She uses it on a notebook and Windows desktop.

She prefers to be sent Word documents if possible as they work better than PDFs with her screen reader.

She has an iPhone. It’s got some helpful features like VoiceOver and Speak Screen, which help her find her way around her phone.

Ashleigh also uses a Kindle and audiobook services to read the texts on her course.

She wants to be more independent.

Ashleigh uses a keyboard instead of a mouse. She gets annoyed when she has to tab through lots of things before she gets to the content she’s looking for. She’d like content to be easy to navigate.

She finds it hard to quickly navigate a page with poor headings.

When she’s shopping online, she often can’t visualise the item she’s looking at because there are no image descriptions that her screen reader can understand. 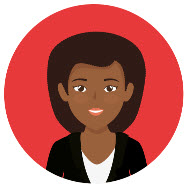 Claudia is partially sighted due to glaucoma. She works part-time as a Water Quality Scientist for Thames Water. Her site loss has affected her confidence at work, but she hopes that completing her Masters will give her the confidence boost she needs to progress further in her field.

Claudia’s setup at work includes ZoomText (software that lets you magnify what’s on screen), a large monitor and a high visibility keyboard. She has a similar setup at home.

She recently got a Kindle for reading - she has tried its screen reader function, but she prefers to use the magnification to read herself or use audiobooks.

Claudia prefers phone calls to emails and never sends text messages. She uses the ‘speech to text’ feature on her smartphone, which records a message and sends it to the person she’s contacting.

Claudia wants to be able to phone any company she needs to contact - it’s much quicker and easier for her to call than to write. She also wishes there was less clutter on some websites.

Claudia tends to forget to scroll horizontally when she’s using ZoomText. It can be difficult if content isn’t set out consistently.

It can be hard for Claudia to see web content clearly when she borrows her husband’s tablet, if the colour contrast isn’t good. 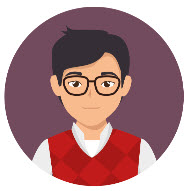 Pawel is living with his mum and dad in Newbury during his course. He has ASD, a condition that affects how he sees the world and interacts with people. He was also recently diagnosed with anxiety. He’s been looking at the National Autistic Society’s resources on employment for when he finishes his degree.

Pawel is good with technology and can usually figure out how things work. He prefers to use apps because they’re simpler and less cluttered than websites.

His parents recently bought him a laptop for his birthday, which he uses for gaming and his studies.

He’s not keen on face to face communication, but likes chatting to people in gaming communities online.

Pawel wishes he could find what he needs on websites more easily - sometimes there’s so much to read. He prefers to talk to people using web chat – he has more time to think about what to say.

Pawel gets easily distracted and wants to read everything and click every link. He wishes there wasn’t as much text or links. Pawel also finds moving content like banners or video distracting, and gets stressed by bright colours.

He doesn’t like speaking on the phone, but a lot of companies don’t let you contact them by email or live chat (or they make their details hard to find). 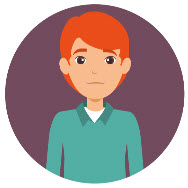 Harry developed juvenile arthritis at the age of 15. He suffers from stiff, painful joints, making completing everyday tasks challenging. Symptoms are worse after sitting still too long, or after waking. Eye inflammation can cause redness and blurry vision and sensitivity to light. Harry often experiences fatigue and disrupted sleep, making concentration difficult.

Harry uses a MacBook to complete university work. He uses a wrist rest. He has programmed some shortcuts into his keyboard, and prefers those to his trackpad (which is painful to use after a while). He uses Dragon Naturally Speaking and has an iPhone.

Harry wants more software to work properly with just the keyboard. He finds some of the academic databases frustrating to use as they only work properly with a mouse. However he can use Dragon Naturally Speaking to get around this most of the time.

It’s annoying for Harry when he can’t use certain parts of a website with a keyboard, like video players and navigation menus.

He sometimes has problems with pop-up boxes. This happens most when a pop-up appears but the tab control stays on the background page, meaning he can’t interact with the pop-up or close it. 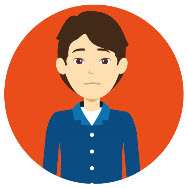 Scott was diagnosed with depression and anxiety during his A levels. He’s not keen on discussing his mental health with others, unless he feels comfortable with them. He has felt able to confide in his tutor, and a couple of his close friends on the same course.

Scott experiences panic attacks, especially during periods of stress, such as exam and deadlines. During episodes of depression, Scott often has difficulty sleeping and concentrating on his studies.

Scott uses a Windows Surface device for studying. He has an Android phone which he uses to access resources and subject-specific apps.

Scott would like his learning environment at the University to be as flexible as possible. Sometimes he struggles to take everything in, especially if he’s having a bad day. Being able to revisit material is important. Scott would also like to be able to easily contact his tutor for help.

While Scott likes the flexibility of the online learning environment, he worries he’ll feel isolated or lonely if the class is dispersed during the year.

He feels anxious when he missed the thread of a lecture or seminar and he has no way of revisiting it. It often takes Scott a while to think of what he’d like to say in an online environment. He doesn’t like it when students aren’t given time to contribute.