Answers In The Rainforest

The combination of academic staff who are experts in their fields of study; opportunities to engage with subjects in distinctive ways and learning that is rooted in research and aligned with practice has seen the University awarded Silver in the UK Government’s Teaching and Excellence Framework.

Frank Mayle, Professor of Tropical Paleoecology in the Department of Geography and Environmental Science exemplifies this approach, providing inspirational learning opportunities for his students through his work reconstructing the history of the Amazon rainforests.

As one of the most biodiverse locations on the planet, Amazonia is thought to be home to up to half of all species, and around one third of all carbon on land. But how will the rainforests respond to the impact of global warming, human land use and deforestation?

Professor Mayle draws on his extensive research to address this vital question. His work involves taking samples of sediment from deep inside the earth for microscopic analysis in order to understand the long-term dynamics of rainforest ecosystems, which can help predict their likely response to natural drivers such as climate change, as well as human interaction. 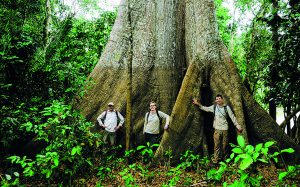 During one of Professor Mayle’s recent research projects in the Amazon, hundreds of mysterious earthworks were uncovered as modern deforestation revealed sites concealed for centuries by trees. The earthworks have revolutionised our understanding of the ancient societies that built them and how they interacted with their environment.

There is increasing archaeological evidence that human populations in the area formed much more complex societies than previously thought, and that they had a major impact on the landscape. Professor Mayle and his collaborators have found strong evidence that these indigenous peoples altered biodiversity of the rainforests to suit their own needs; from deforestation in order to build monuments to favouring the growth patterns of palms over other plants, which were needed for a range of uses, such as medicines, food, dyes and construction.

The discovery raises questions around land use, sustainability and conservation efforts. Discouraging human interaction with an environment in order to preserve it is challenged if the very biodiversity we intend to protect has been altered or generated in some way by indigenous peoples over thousands of years – but how the land may be used, and to what extent, so as to be beneficial or harmful is still to be explored.

Unquestionably, the work of Professor Mayle and his team is providing inspiration for the next generation of scientific experts, who, by being challenged with questions like this, will perhaps be able to help to shape the future impact of humanity on the world around us.

Find out more about the impact of the School.