Since our ancestors painted on cave walls, humans have thrived on telling stories. They form a vital part of cultures and have long acted as a tool for sharing and remembering information.

Though often considered the realm of the arts and humanities, one University of Reading researcher is deploying the narrative form in a surprising place – climate science – with the aim of helping us to clean up our act.

Developed by Professor Ted Shepherd, meteorologist and inaugural Grantham Chair in Climate Science, the ‘storyline’ approach treads beyond the domain of conventional science.

“Traditionally, science has been concerned with absolute facts; theories that are universally applicable. This often requires you to strip away the context.

“But for most people – whether it’s national policymakers or a farmer in sub-Saharan Africa – this makes the information less meaningful to them.”

Changing how we think about climate science 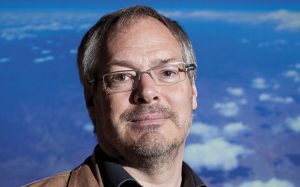 Professor Shepherd’s storyline approach inverts more established methodologies of climate science, which look to infer general knowledge about climate change from extreme events, such as wildfires or floods. Instead, he argues, we should be using our existing knowledge of climate change to study the events themselves.

Working back from a specific event, the storyline approach identifies the combination of different causal factors – some meteorological, some in the built or managed environment – that resulted in that particular outcome.

By placing these causal factors within a narrative, it is possible to use climate and impact modelling to simulate the way things could have happened if one or more of those factors had been different – creating a sort of decision tree.

Through these simulated scenarios, policymakers can explore vulnerabilities and better understand risks. And because the information is placed in context and is relevant to conditions in a particular area, any mitigating actions or improvements can be more customised than generic climate modelling predictions allow for.

“One analogy is personalised treatments for illnesses like cancer,” explained Professor Shepherd.

“Standard treatments use brute force and attack the whole system – they’re very invasive and unpleasant. But we’re increasingly able to tailor treatments to the individual and target only the cancer, which is more efficient and results in fewer side effects.”

Perhaps most importantly, storylines can strengthen decision-making and the will for action. As humans, we are much more likely to act based on lived experience rather than abstract knowledge. That is why improvements and safety measures often only happen following an event – even when there was prior warning.

The use of narratives brings to life the potential impacts of climate change more powerfully than any chart or graph ever could.

And the need for action has never been more important.

Professor Shepherd explained how carbon emissions are still the primary issue in climate change: “Carbon stays in the atmosphere for thousands of years. Whilst we still don’t fully understand the earth’s ‘climate sensitivity’ – how much the climate warms from a given amount of carbon – we do know that every additional molecule emitted will make that warming worse.

“We are going to have to reach zero net carbon emissions eventually and that is a very sobering thought. But the sooner we start, the more options we will have.

“We need to look at all aspects of our lifestyles and consider what’s valuable to us and what the hidden environmental costs are. The storyline approach is one way to connect the consequences with our decisions in the context of regional climate.”

Professor Shepherd’s approach represents a real shift in the way we think about and respond to the risks and uncertainties associated with climate change, but it also has the potential to be adapted for a variety of settings.

Two early adopters include companies working with PhD students at Reading, under Professor Shepherd’s supervision, to apply the approach to real-time problems in nuclear reactor flood risk, and water security.

Despite the wide range of applications and common-sense nature of storylines, the work is still considered somewhat radical among scientists, funders and research councils.

“It’s a call for scientists to be more proactive,” he explained. “Typically, we present our data independently of how it will be used and this can make us quite conservative.

“But it is often the more ‘adventurous’ ideas that can make a real difference to the most vulnerable.”

The impact of your support

Fortunately, Professor Shepherd has been able to advance this line of work thanks to an academic chair funded by a like-minded donor.

“The Grantham Foundation [for the Protection of the Environment] has allowed me the freedom to explore this area and take a much longer view on the work than a typical academic post or research council grant would have allowed.

Professor Shepherd is now working to transform the generosity of the Grantham Foundation into real-life impact through his work with international organisations, such as the Intergovernmental Panel on Climate Change and an EU interdisciplinary consortium to assess climate risk in Europe.

Some of the narratives emerging from these collaborations paint potential futures that make bleak reading. But with Professor Shepherd’s approach, we can better understand, prepare for and mitigate the risks amidst the uncertainties associated with our changing climate.