The Risk Of Global Supply Chains

The UK’s battle against COVID-19 has been defined by a lack of crucial medical equipment. Professor Uma Kambhampati explains to CONNECTED how the pandemic has exposed weaknesses in the UK’s supply chains.

Professor Kambhampati, from Reading’s Department of Economics, explores why the whole idea of global value chains, and certain countries’ lack of self-sufficiency in key strategic industries, will need to be reconsidered after COVID-19. 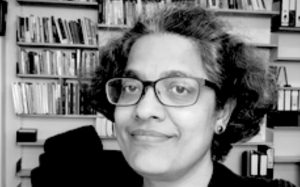 Having begun more than a century ago, globalisation has gathered pace in recent decades on the back of everything, from freer trade to the reduced power of British trade unions. Underlying this was the notion of the value chain – Professor Kambhampati explains this principle:

“The notion of the value chain, is the idea that different companies add value to raw materials at each stage in the production process until they become finished goods.

“Generally speaking, each stage is more lucrative than the last and, in recent years, the stages have been spread across continents and countries.

“So, for example, it’s more lucrative to make steel than to mine the raw ingredients, and more lucrative again to use the steel to make vehicle parts, and then even more lucrative to sell cars. There is also much value in services located near the top of the chain, such as researching better engines or providing legal advice on supply deals for car dealerships.”

Professor Kambhampati explains that this philosophy involved leaving “lower” stages to developing economies and concentrating on the more valuable stages instead. Manufacturing in the UK duly declined from almost 30% of the economy in 1979, when Margaret Thatcher came to power, to 10% today. The assumption was that so long as we moved up the value chain and remained able to pay for what was available, supply would never be short.

Professor Kambhampati notes: “This mindset was rudely disrupted by the nationalist ructions of the Brexit vote and Donald Trump’s election in 2016. And it has been turned on its head by COVID-19.

“We are now witnessing the UK’s struggle to access basic medical equipment to deal with the pandemic. Day after day in the press briefing, ministers are on the back foot over Personal Protective Equipment [PPE], testing and ventilators.”

The UK lost valuable time early in the outbreak by not placing orders for necessary equipment, but Professor Kambhampati explains that it is the longer-term trends and international responses that really explain the failure.

She said: “The lack of domestic manufacturing in the UK has meant no first-buyer privileges for the government to leverage. The UK’s health secretary, Matt Hancock, alluded to this when he said the UK did not go into the crisis with a huge diagnostics industry that could be scaled up.

“The Germans could call on Swiss global diagnostics giant Roche, which has a heavy presence in Germany; while South Korea had smaller pharmaceutical producers such as Kogene Biotech. This helps explain why both countries have managed to test widely, whereas the UK is struggling to meet its daily target.

“The UK is also not part of global supply chains for the basic components of the tests – reagents and nasal swabs – both of which are in short supply.”

Another example is ventilators. At the start of the crisis, Germany could place orders for 10,000 ventilators with domestic medical supply company, Draegerwerk – one of the world’s three largest ventilator makers. Whereas the UK government had to rely on Dyson, Babcock, Airbus and Formula 1, none of whom were in this space already.

It is similar with masks. China made 50% of the world’s masks before the crisis, and has expanded production 12-fold just to meet domestic demand. The UK lacks the manufacturing capabilities to upscale in this way and has been unable to rely on the global market to provide the masks it needs.

Professor Kambhampati points out that: “While Burberry, Royal Mint and Rolls-Royce are producing gowns, and Ineos, Diageo and Unilever are making hand-hygiene products, the UK’s capacity for such flexibility is limited compared to Germany or South Korea.

“As Hancock again conceded, the UK ‘went into this crisis without a large-scale domestic PPE manufacturing industry to draw on’ and ‘several countries have placed export bans on the sale of PPE’.”

As countries close their borders and turn production inwards, multinational firms that were part of global supply chains cannot export freely. China was not authorising mask exports at one stage, while the US forced American companies to prioritise US orders, preventing 3M from supplying premium masks to Canada and Latin America.

Time for a change?

The UK’s strategy of concentrating on research and development, and innovation, as well as services in which it is thought to have a comparative advantage such as law, finance and advertising, was part of this wider focus on globalisation. While this was highly successful in peacetime, Professor Kambhampati highlights that the shortcomings have certainly been demonstrated in 2020.

She said: “Some economists suggest that the only way out of this impasse is further global cooperation, and moving away from the highly destructive nationalism that has taken over international medical equipment markets. Clearly, global cooperation will be essential to avoid regressing into protectionism.

“Yet governments are also realising that global production carries profound risks in a crisis. The German health minister, Jens Spahn, has said that his country needs to reduce reliance on international production, while the UK government seems to be realising this too.

“In future, countries will probably decide on key strategic industries in which they need to be self-sufficient. This may well increase costs for consumers, but they may be willing to pay the price. When the dust settles on COVID-19, our whole approach to global trade looks likely to be reconsidered.”

This article was first published in The Conversation on 28 April 2020.