Why We Are Not All Equal

To celebrate LGBT+ History Month, CONNECTED talks to Hafsa Qureshi – Stonewall Bi Role Model of the Year 2019 – about her experiences of coming out and her upcoming lecture: ‘Why We Are Not All Equal’ at the University of Reading on 3 February. 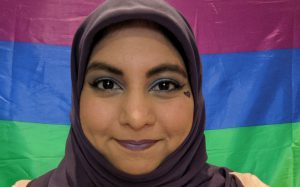 Hafsa – who uses the pronouns she/her – is currently a client account manager at Stonewall, who enjoys playing video games in her spare time and currently lives in Birmingham. She is also bi, Muslim, disabled and has become an influential figure in the LGBT+ community in recent years.

As well as seeking to improve awareness of queer people of faith, Hafsa hopes to educate both people within and outside of the LGBT+ community on the issues that people of multiple identities – such as herself – can face throughout life.

Hafsa shares with CONNECTED what her experience of coming out was like, how she found herself becoming an influential role model for the LGBT+ community, and the themes she’ll be discussing in her upcoming lecture at Reading.

Hafsa shares an insight into her experience of coming out as bi, and how she has learnt to come to terms with people’s judgements of her.

She said: “When I first came out in my personal life people made assumptions about me. I have worn a hijab for 15 years and I am a practising Muslim, but when I came out as queer my devotion to my faith was instantly called into question by my community.

“People wrongly judged me and assumed that because I’m queer I’d automatically be abandoning my religion. I’ve received death threats since coming out, but what hurt the most was being called a ‘kafir’ – which means a non-believer – by my own community.

“Many people from Muslim backgrounds struggle with faith – in fact, you’re meant to struggle with it – but for me, it’s being a queer Muslim that is a struggle. This is who I am, but in the eyes of my religion, I shouldn’t exist.”

Hafsa believes that she’s achieved the best case scenario in terms of her community accepting her for who she is – in the form of apathy.

She said: “Settling for apathy is my best case scenario. My fellow Muslims now pray next to me and don’t comment on what I do with my life. Apathy is a much more achievable goal than hoping to be celebrated for who I am within my community.

“I also received a less obvious, but nevertheless negative response when I came out at work. I got involved in the LGBT+ network at the Ministry of Justice and agreed to be profiled – my face went up on posters which were impossible to miss – suddenly everyone knew I was queer.

“I noticed that people who had happily spoken to me the week before, now avoided me – they walked the other way if they saw me coming. Coming out definitely had an impact on the way people treated me.”

Hafsa has reached the point where she no longer allows these negative people to have an impact on her life.

She said: “Instead of pursuing true acceptance within my existing community, I realised that it’s important to look outwards and make my own. I have a wonderful friendship group and a fiancé who looks out for me. I’ve also made lots of amazing, inspirational friends through my LGBT+ work.

“I no longer care what people have to say about me. My concern is how other people – children or those more susceptible to influence – will feel on hearing and seeing this derogatory behaviour towards members of the LGBT+ community.”

After getting involved in the LGBT+ network at work, Hafsa found her role as an influential figure snowballing far beyond what she could’ve anticipated. She said:

“People started emailing me to ask for advice. It was really lovely that people wanted to be just like me – already out – but it was also sad that so many people didn’t feel they could be. It’s not simple for many people.

“Then in 2019, when I heard about protests at Parkfield Community School in Birmingham over the curriculum being LGBT+ inclusive, I decided to try and help. I hoped that by being from the same community and speaking the same language – with the only difference being that I am queer – I would be able to help these parents understand the importance of an LGBT+ inclusive curriculum.”

Hafsa was further propelled into the limelight when the Chair of the LGBT+ Network at her work nominated her for the Stonewall Bi Role Model of the Year 2019 Award, but didn’t tell her until she’d won.

She said: “I was very surprised and happy when I heard I’d won the award. At the same time I was also nominated for and won two other awards – the Asian Achievers Award and the Gay Times Top 100 Honours Award – so I ended up winning three awards just for existing. I didn’t think I was doing anything special; I was just being myself.”

After winning this award, Hafsa became more involved with Stonewall and, upon learning that they hired people based on their potential and their lived experience rather than simply their CV or possession of a degree, she kept an eye out for jobs there.

She said: “I am now a Client Account Manager for Stonewall, working with organisations who are looking to improve their LGBT+ relations within their companies. It’s a difficult programme but it’s important to push organisations to do better and be better – to say we’ll go one step further than what the law says we have to.

“I love the work I do – in both my professional and personal life. I find it awkward talking about myself and I’ll be honest, I never intended to become a role model.

“But I receive so many positive messages from other queer people of faith who are being told they can’t be religious because of their sexual identity, that I know I have to do everything I can to help other people be themselves.”

Looking to the future

While Hafsa never intended to become the influential figure she is today, she nevertheless has high hopes for the future.

She said: “I work with so many other incredible people who shy away from the limelight, but still do amazing work, and I hope to inspire them – or newcomers to our community – to step forward and take on the mantle from me.

“However, while I didn’t intend to be the influential figure I’m told I am today, I do have very lofty goals and aspirations for the future. I want the world to change and I want the media to change the way they talk about minority groups.

“For example, the way the media talks about transgender people is reprehensible – and it’s similar to how they used to talk about gay men as predators – it’s just been sublimated. It feels like there always has to be a group that’s targeted in some way to be blamed for the misfortunes of the world.”

Hafsa gives an insight into the topic of discussion at the University’s annual Wolfenden Lecture on 3 February.

She said: “I keep hearing that the world has changed and is a better place now; people make assumptions that we’ve fixed the problem just because we don’t use certain words anymore.

“But instead, the way that hatred and bigotry are presented is different – it’s more coded, or shielded through micro-aggressions – but because it’s less glaringly obvious, it allows people to side-step it.

“Yes progress has been made, but we now have the problem of ‘othering’. This is what I call it when people believe that they can’t be contributing to the problem, but that other people are the problem.

“People also need to be aware that the world was built against people of colour, against gay people, and against those with disabilities – so to say you treat us all equally without seeing differences doesn’t work, when some of us have to work harder than others to exist in this world.”

Join Hafsa to continue this discussion on 3 February at 19:00 (GMT) – this virtual event is free to attend. Register your place now.