In 2006, Professor Celia Kitzinger campaigned for her lawful Canadian marriage, to wife Sue Wilkinson, to be legally recognised in England. As part of LGBT+ History Month, CONNECTED speaks to the Reading graduate about her personal experience of campaigning for LGBT+ equality and her research in the field. 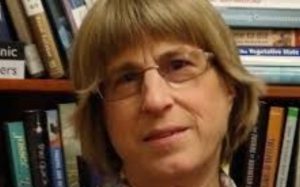 When asked what LGBT+ History Month means to her, Celia said: “This is a time for remembering – or learning about – the lives of people who didn’t comply with dominant norms of ‘gender’ or ‘sexuality’ in earlier times, and what they achieved in spite of discrimination and sometimes brutal oppression.

“Our history helps us to understand our present and can guide us towards the future. I have lived through a period of tremendous change, and I hope I have contributed to that change.”

Graduating from Reading with a PhD in psychology, Celia went on to spend more than 40 years in academia, and is now an Honorary Professor in the School of Law and Politics at Cardiff University where she co-directs the Coma and Disorders of Consciousness Research Centre (CDOC).

Celia reveals what it was like to come out as a teenage lesbian in the early 1970s, and how these experiences steered her towards studying psychology.

She recalled: “I went to the library and looked up ‘lesbian’ in the catalogue. What I found was horrible – pathologizing and alienating accounts by psychologists and psychiatrists – who portrayed women like me as mentally ill, as the products of disturbed upbringings with over-possessive mothers and distant fathers.

“When I did come out, my lesbianism was treated as both a passing teenage fad and a disease. I was expelled from two schools because of my sexuality, I attempted suicide aged 17, and I was sent to a mental hospital where they failed to ‘cure’ me of my sexual orientation.

“These experiences drove my decision to become a psychologist and challenge these oppressive representations from within.”

It was through psychology conferences that Celia met her future wife: “Sue was also a feminist campaigner within psychology and we became a couple in 1990. We worked together on many projects, including a book on heterosexuality which was designed to problematize and reverse normative assumptions.”

Sue and Celia married in Canada in 2003, but when they returned to England – where same-sex marriage wasn’t legally recognised – they had to fight for marriage equality. Celia explains:

“Our marriage was essentially taken away from us. In the eyes of the law we were unrelated; we’d been deprived of equality and that was outrageous. 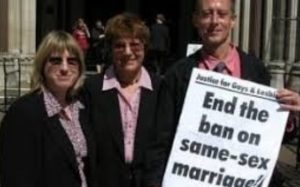 “A few months later, the Civil Partnership Bill was introduced and we were told our marriage would be recognised as a Civil Partnership in England. But this still didn’t give us equality with heterosexual couples. With the support and advice of two human rights organisations – Liberty and Peter Tatchell from OutRage! – we took our case to the High Court in 2006. Not only did the most senior judge oversee our case, but the government also chose to intervene to oppose the recognition of our marriage.

“After a three-day hearing the judgement came that we were being discriminated against, but that the discrimination was justified, in the judge’s view, in order to protect the heterosexual nuclear family.

“The judge even declared that gay couples were not family. Having received such a conservative ruling, all we could do next was ask the media to highlight the injustice.”

When the Marriage (Same-Sex Couples) Act came into effect in 2014, the couple – who had then been married for more than a decade – renewed their commitment at a big party with family and friends.

Having decided to study psychology with the hope of challenging its representations of lesbianism, Celia has indeed changed the landscape of the field.

After completing her first degree in Experimental Psychology at Oxford University – and finding that subject involved too much time spent with rats – Celia took a break from her studies to work with a gay support and referral group in London.

She said: “Then in 1980, I decided to give my studies another go and I applied to several universities to research lesbian politics and identities.

“This wasn’t exactly a popular topic at the time and most of them turned me down; I was immensely grateful when Reading offered me a PhD place, as well as a full grant from the Economic and Social Research Council.

Celia’s thesis was subsequently published as an award-winning book, The Social Construction of Lesbianism. Following her time at Reading, Celia – amongst numerous other professional achievements – spent nine years lobbying the British Psychological Society (BPS) to set up the Lesbian and Gay Psychology Section (now the Psychology of Sexualities Section). She said:

“Along with Sue, and fellow psychologists including Rachel Perkins, Adrian Coyle and Martin Milton, we insisted that psychology needed to involve lesbians and gay men.

“During our campaign we received hate mail from chartered psychologists who were members of the BPS, but we knew what we were doing was right and on our fourth attempt, in 1999, the BPS finally accepted this and the section was formed. Since then it has since gone from strength to strength.”

Since 2009, Celia’s research has moved away from LGBT+ issues. She is now focused on the human rights of profoundly disabled people – after her sister, Polly, was catastrophically injured in a car crash – as well as a lockdown-inspired project on how to make court hearings more accessible to the public (the Open Justice Court of Protection Project).

However, her work is still underpinned by the same guiding principle of social justice that launched her early work on lesbian issues.

She said: “The work I’m doing now in law is a different manifestation and development of the passion for justice that brought me to Reading for my PhD in the first place. And while I haven’t been involved in LGBT+ politics for over a decade, I’m still inspired by my belief in justice and equality.

“As a teenage lesbian, for whom coming out – and staying out – was an act of desperate bravado involving constant vigilance, I could not have begun to imagine the world I now inhabit – as a married lesbian who is apparently widely accepted in ‘normal’ society.”

Read more about Celia and Sue’s fight for the legal recognition of their marriage in England.

Discover how our other incredible alumni have been making a difference in the LGBT+ community.