Reading graduate, Neil Peters, speaks to CONNECTED about how his experiences in transport planning and the charity sector inspired him to take a leap of faith, and set up his own business – Nuthatch Consultants – to support organisations with suicide prevention. 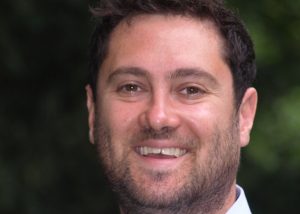 Growing up in South East London, Neil discovered a passion for geography whilst at school, and it was this, together with Reading’s reputation of excellence, that encouraged him to study human geography in the School of Archaeology, Geography and Environmental Sciences.

“Geography was my favourite subject at school. I was particularly interested in the human side of it, and when I was looking at universities the content of the course was really important to me. I liked how the department at Reading was self-contained – like a little school in itself – it wasn’t bolted onto bigger departments like at other universities.” Neil explained.

Reflecting on his time at Reading, Neil said: “I really integrated myself into university life and made a lot of friends, and had a great three years at Reading.”

When the stars align

On graduating from Reading Neil was unsure of what to do next, so he took a year out to go travelling. He explained:

“A big part of my studies focussed on the third world and developing countries, and that, alongside travelling, was what first sparked my interest in making the world a better place and helping vulnerable people.”

Upon his return, he embarked on a master’s degree in transport at Imperial College London, before securing a job with global engineering, management and development consultancy, Mott MacDonald, where he stayed for the next seven years.

Neil said: “Although I really enjoyed studying geography and transport, when I started working in the field I realised it wasn’t for me. Alongside my role at Mott MacDonald, I took on various volunteer roles with charities, and it was this work that inspired me to make the decision about what I really wanted to do.

“I took voluntary redundancy and applied for a short-term role at Street League, a football charity who work with youngsters and help get them back into employment. Towards the end of my time there, a role with Samaritans was advertised about helping to prevent suicide on the railway.

“I had knowledge of the rail industry from my time in transport planning, and with the role being in the charity sector, it just felt like the stars had aligned for me.”

Neil joined Samaritans ten years ago as a project officer, and was later appointed as their strategic programme manager, responsible for leading Samaritans and the National Rail industry’s Suicide Prevention Programme.

He said: “When I joined Samaritans I didn’t know much about suicide, but I soon discovered that when you’re working in that environment, you either leave quite early on or you care so much about it that you’re in it for the long-haul.

“You can really see the impact suicide has on people’s lives and there are lots of things that can be done at both a strategic and individual level to prevent it.

“When I worked in transport planning some of the projects I managed had long-term benefits – like improving someone’s journey – and therefore it was sometimes quite difficult to see the difference my work was having. However, when working with Samaritans volunteers, it made it clear how vital the organisation really is.

“Knowing that someone at the organisation where you work has saved an individual from taking their own life is incredible. The volunteers give up their time every week – some before or after work and some at weekends – and although they are well-trained they aren’t professionals.

“That just goes to show what can be achieved by individuals wanting to make a difference.”

Neil told CONNECTED that whilst he was working for Samaritans his brother-in-law tragically took his own life.

He said: “That’s one of the reasons I later got involved with the National Suicide Prevention Alliance [NSPA] – a cross-sector organisation working to reduce suicide in England, and improve support for those who have been affected by suicide.”

Neil was appointed as the NSPA’s freelance programme manager to help launch their Lived Experience Network.

“Living the experience as opposed to looking at it from an outside perspective was very different. Of course everyone’s experiences will be different, but you share an awareness of what it’s really like on a practical and emotional level.

“People’s experiences help to paint a picture of what can happen, and getting different perspectives on what can make a difference is really important – it helps to shape how you can deliver the right support and is really valuable when you’re talking to policy makers and service providers”, Neil explained.

Taking a leap of faith

Whilst working at Samaritans, Neil started to see how his work could be adapted for different industries.

He said: “It was quite a challenge for industries and individual organisations to fund suicide prevention initiatives, but we often tried to set up partnerships to fund these. However, we could never quite get them off the ground and I started to see that there was an opportunity to offer smaller organisations my expertise.”

Just before the first national lockdown, Neil decided to leave Samaritans and set up his own freelance business, Nuthatch Consultants, whose aim is to support charities and businesses with suicide prevention, mental health and well-being advice.

He said: “To be honest it was a bit of a leap of faith. I didn’t know if this freelance business was going to be a sustainable career, however I’ve been really lucky to pick up work straight away.

“Most of the work I’ve been doing has been looking at suicide prevention strategies and plans for organisations that operate in public places – like landowning businesses or infrastructure managers such as Highways England.

“They want to protect people in their local communities and save lives. I’ve also been able to support charities with suicide prevention projects.”

Turning his thoughts to COVID-19, Neil recognised that the risk factors for suicide have significantly increased:

“People are talking about the extraordinary times we are living in at the moment, and the impact this is having on mental health. It’s at the forefront of people’s minds, and lots of organisations are starting to think about how they can look after their staff’s well-being to help those who are struggling.

“People – especially young people – have been sharing a lot of experiences of isolation, loneliness and the stress and anxiety of being trapped indoors.”

Delivering outreach and training services has also been difficult for the sector during the pandemic. Neil said: “Organisations had to adapt almost overnight to deliver their services in an online environment, and when talking about an emotive topic – like suicide – there’s nothing quite like being in the room with someone. It’s those casual conversations at lunchtime and before training that you don’t get online.”

For the greater good

Reflecting on how helping people through his line of work makes him feel, Neil said: “I have the same stresses and challenges that anyone working in a project role has, however when you know you’re doing something that’s going to have a positive impact, for the greater good, it makes everything worthwhile.

“Hearing from people who have really struggled with their lives but sought help and got better, makes you realise that suicide can be prevented and there is hope. It’s about getting that word out there and tackling those taboos.”

Discover more about Nuthatch Consultants and the work they do.