Arm is a semiconductor intellectual property design company, who believe that technology has the power to build a better future for everyone. 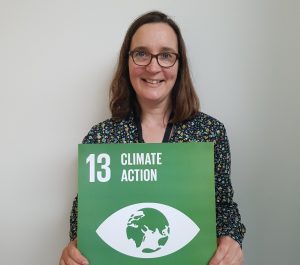 Fiona shares with CONNECTED what inspired her to go into a career focused on sustainability, Arm’s commitment to become net zero carbon by 2030, and her views on why it is important to take steps now to be more sustainable.

Having always loved nature, plants and being outdoors – together with a passion for science and environmental subjects – Fiona was keen to take these interests forward in her future career. After graduating from Reading with a master’s in biological sciences, she worked for nature conservation charities such as the Woodland Trust and Fauna & Flora International. She said:

“Going into a career focussed on sustainability wasn’t a conscious choice – it felt inevitable.

“Through these roles I began to see more evidence of the impact of climate change on the nature that I loved, and I decided that I wanted to do more to help. So I took a big decision to leave the charity sector and became a climate change officer for a local authority.”

This move paved the way for Fiona’s next venture – joining the climate team at the Cambridge Institute for Sustainability Leadership – where she worked with businesses around the world on ambitious climate policy. Her next step saw her venture into the private sector to join Arm where she has worked for the last four years in their sustainability team.

In her current role, Fiona is part of a team that encourages both Arm and the wider technology sector to work towards the United Nations Sustainable Development Goals. She said:

“What I love about my job is that I’m always learning and being challenged but my opinions and recommendations are valued, which makes me feel like I can make a difference and be part of a change for the better.”

More recently Fiona’s role has focussed on carbon reduction, and she shares how her team has led Arm through the process of setting a net zero carbon commitment.

“After we met our previous targets, we started to look at what our next goals would be. I began by researching what other businesses were doing to broaden my understanding of best practice and what good leadership action looked like,” she explained. “And I became increasingly aware of a growing movement of businesses committing to net zero.

“There wasn’t an agreed universal definition then, and it concerned us that both action and a lack of action, can be hidden in a misdefined term. One of the things our team felt strongly about was that we needed to be transparent around what we meant by net zero and to take an ambitious definition,” Fiona shared. “So we set our definition of net zero, considered what this would mean for Arm, made a case for why we should do this, and then presented it to our senior leaders.

“I’m pleased to say it was met with interest, and after some discussion and tweaks to the plan, our commitment to reach net zero by 2030 was agreed and publicly announced.”

Fiona and her team have set Arm on the path to deliver a truly cross-functional net zero commitment by setting individual targets – including switching to renewable electricity, increasing energy efficiency and reducing business travel.

Fiona explained: “There were two areas of our carbon footprint – supply chain and commuting – where we didn’t have the data to set targets. However, due to the urgency of the climate crisis we didn’t want to delay taking action so we made a wider commitment – promising to collect the missing data.

“And we have done exactly as promised for our supply chain – our new targets have been set and we are now working on our commuting data,” Fiona added.

As Arm continues to deliver on its net zero commitment, Fiona and her team have been reviewing the data at each key stage to find out what progress has been made.

“So far the numbers look good because of the restrictions that were imposed by COVID-19,” Fiona said. “However, what we are more interested in are the process and policy changes that we have been able to implement which mean our emissions won’t go back to the same levels now that restrictions have eased.

“It’s incredibly rewarding to see the changes that are starting to be embedded across Arm.”

The importance of acting now

Fiona shares with us why it is important to take steps now to be more sustainable, and what role she thinks technology will have in the future.

“We have a moral imperative to live more sustainably, otherwise we risk future generations,” she said.

“Diplomat Christiana Figueres made a stark but very real statement that has stuck with me: ‘Net zero is inevitable. We will reach it by design as we set policy and take action to reduce our emissions, or nature will force it on us as it becomes more difficult for humans to survive on earth and our population reduces along with our emissions.’ I know which option I’d prefer.

“A net zero world offers many exciting opportunities for the future – I’d like to live in a world with cleaner air, more reliable and efficient transport, better quality jobs for more people and more green space.”

Turning her thoughts to the role technology has in our future, Fiona said: “There are so many positive ways technology can contribute to a more sustainable future including generating renewable energy, supporting resource smart agriculture, monitoring emissions and keeping institutions accountable for them, and decarbonising transport systems to name a few.

“It is vital that we use technology where it makes sense in a net zero world. Whilst renewable energy is just that – renewable – we will need to balance the space we are using to generate electricity with the space that is being used for other critical things, like growing food or nature.

“Many existing and emerging technologies will have a positive impact and contribute to a net zero world, and it is essential that those technologies are supported and scaled-up.”

It is clear that the impact of climate change is something that Fiona has always been passionate about, and that is also transparent in her efforts to make her day-to-day life more sustainable.

She said: “I became involved with a local charity that helps citizens to reduce their carbon footprint. They helped me to understand that there isn’t always a single right answer, but there is always room to make improvements.

“I’ve worked out loose guidelines that work for me so I can make a difference, but which also won’t paralyse me with indecision for fear of not doing the right thing. For example, I grow some of my own food and get a local vegetable box delivered, but I also go to the supermarket and buy things that break my rules sometimes and I’m OK with that.

“I mainly travel by bike and on public transport and I’ve set myself a limit for how often I’ll fly. Having recently learnt that one of the biggest impacts individuals can have is understanding what their pensions are supporting, the next thing on my list is to ensure my pension is invested in an ethical fund.”

Discover more about Arm, or find out more about studying for a master’s at Reading.