I teach on the REMF54 module: Property Law with 48 students. Attendance is problematic in the initial weeks of the module.  Students are invited to Employer Assessment Centres which clash with live sessions. Since important foundation concepts are covered in the early sessions, I wanted to create an engaging and effective resource to encourage the students to take responsibility for catching-up, in addition to the “static” materials already provided (lecture slides, workshop materials, supplementary course text reading etc.).  I also wanted the students to catch-up in “course-time”, rather than leaving it until the end of the module: screen-casts could be a less intimidating/more manageable route into achieving this.

I began by editing the live session slides with the intention of creating bite-sized screen-casts.  This proved tricky since the material is complex and hard to prioritise. Ultimately, I decided to create 3 approx. 15 min. screen-casts, dealing with the learning outcomes independently, for each of 2 live sessions. I wrote a script to ensure I retained focus and clarity.

I introduced recap quizzes to keep learning active.  Whilst recording, I encouraged the students to pause the recording to write down answers to the quizzes.  I revealed the answers at the end of each recording.

No students were involved in the recordings but, as I created the screen-casts after the live delivery, I ensured I dealt with questions and areas of difficulty that arose from class.

I recorded the screen-casts using the slideshow plus audio option and made use of simple edit functions where necessary, mainly cutting and fading in/out before uploading to Blackboard. 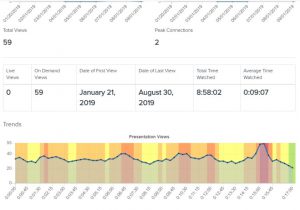 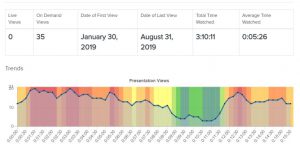 The feedback indicates that the screen-casts were valued and considered effective.  The screen-casts were, in my view, quite rough and ready: it was a challenge to create an engaging product in the time available.  I could have made greater use of the online environment by, for example, thinking more explicitly about how I was explaining things to a listener and developing the slides to make them more visual.  In any event, this does not appear to have filtered through into the feedback with 76% of students agreeing or strongly agreeing that the screen-casts were engaging.

I have made a screen-cast on a particularly complex topic as an exam resource for my undergraduate module.  The question on this topic was the second most popular choice in the exam and the average mark was the second highest rising from 50% last year to 55% this year.  I have also used personal capture to record a Powtoon video I created.