Ever since first treading the boards at Saturday drama school, acting has played a starring role in the life of Terry O’Donovan. His early experiences in entertainment encompassed youth theatre, writing and directing short movies, and an appearance in the big screen adaptation of Angela’s Ashes, leading Terry to choose a degree in film and drama here at Reading.

Since completing his degree in 2003, Terry has had a successful career on stage performing in various shows, such as Take On Me, Handle With Care and Caliper Boy and he is now co-artistic Director of theatre company, Dante or Die. The company have carved out a niche for site-specific shows, guiding audiences through unusual theatrical venues, with previous sites including leisure centres, hotels and even a self-storage facility.

Despite having a busy schedule committed to theatre, Terry has always found the time to give something back to his former university by offering current students opportunities to share their creative ambitions. Whilst working on Caliper Boy in 2006, Terry reached out to Professor Lib Taylor from Reading’s Film, Television and Theatre department and asked her to bring some students along.

“We ran a really useful workshop looking at our techniques – a dialogue that we have kept open ever since.”

Given Terry’s sizeable showreel since graduation, his willingness to share the inner workings of his creative processes is a benefit to students at Reading. After inviting them to his workshop, Terry co-founded TOOT theatre, along with fellow Reading graduate Clare Dunn, Stuart Baker and Faith Dodkins. TOOT applies an innovative approach to its productions by making audience involvement a priority. 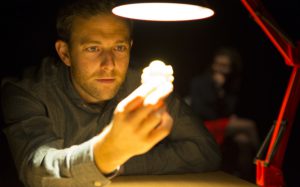 It is through TOOT that Terry has been able to make the most of his academic connections by linking with Reading’s South Streets Art Centre and the University during a week-long residency for the show Focus Group.

Students attended each day to gain first-hand insights into the “nuts and bolts” of putting on a play – and the opportunity has since been presented to further cohorts, leading to Terry taking part in a symposium hosted by the University.

“By brokering a relationship between the Arts Centre, the University department and TOOT, we created a situation that is really positive in terms of the next generation.

“I would hope that it is useful for the students. The more students are exposed to the realities of the industry and the more knowledge they can gain from real-life experiences, the better their prospects will be.”

Terry and TOOT’s generosity in sharing their inner workings with those hoping to raise the curtain on their own theatrical careers is admirable. However, not only has the collaboration enabled current Reading students, but it has benefited Terry himself.

Students attending his workshops are encouraged to share their views on everything from sound levels to the stories being told. Their feedback is taken on board and, in some cases, helps to refine and improve plays.

The youthful critique proved invaluable in the production of a joint research project between Dante or Die with technology agency, Marmelo, Reading’s Film, Theatre and Television Department, and the Centre for Death and Society at the University of Bath.

The User Not Found: Social Media as Immersive Performance project explores the digital legacies of those who die and their impact on those left behind. The performance focuses on the relationship between life, death, identity and social media, engaging audience members by using everyday social technology and a newly developed app.

Terry used the expertise of a younger generation of Reading students to help create the play: “We ran a workshop about this show, which explores how our digital identities live on after us, and it was one of the most dynamic ones I’ve ever been involved in.

“The students are from a younger generation and brought so much that we could tap into. It fed into the writing process and our thoughts about how the show could end up. It’s a really useful way to keep questioning yourself and your own practice.”

User Not Found  has been a theatrical success being performed by Dante or Die at the 2018 Edinburgh Fringe Festival, across the UK and even in the USA and Israel in the past year. The show received raving reviews from various outlets with The Guardian describing it as a “tender, intimate story of love and letting go.”

Terry credits Reading for shaping his career and for giving him the skills to pursue his artistic ambitions, which is why it has been so important for him to help enable current students:

“I call on what I learned quite a lot. My time at Reading was really rewarding and in depth. It was thoughtfully put together and has inspired me to go on to do what I have done in life.”

Find out more about the opportunities available in our Film, Theatre and Television department.