Sarah Haely, a second year student at Reading, shares with CONNECTED how she channelled her frustrations of experiencing racism into working with the police to understand racial tensions in the criminal justice system. 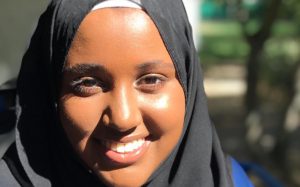 Sarah, who is studying a BA in German and International Relations in the Department of Languages and Cultures, is hoping that by sharing her story she will encourage others to share theirs as well, to overcome racial barriers and lead to greater knowledge, understanding and respect between people, communities and the police.

Sarah tells CONNECTED how her own experiences with the police inspired her to work with them to understand racial tensions between the police and black communities.

Sarah recalled: “Growing up black, I always thought that there was an expectation for me to hate the police. I knew that the police didn’t like me because of my skin colour and they hurt my people, so I had to be anti-police.

“I remember my first encounter with the police – a casual stop and search in London. I didn’t think much of it at the time. They searched my two friends first, both male and black, and then me. I don’t know why they stopped us and we never asked. When they let us go, we all let out a sigh of relief as if we were anticipating something and we were lucky it didn’t happen.

“After that, my friends spoke about the incident for days. They felt frustrated and hurt. The police had stopped and searched us, the only black people in the entire street. To some, this may seem insignificant and it might have been.

“But it’s important to understand that when one combines these isolated incidents of subtle racism, it can create tension and frustration. It makes you feel marginalised, different, almost not worthy.”

Doing something about it

Frustrated, but tired of only talking about the issue with her friends, Sarah decided to join the Youth Parliament to try and do something about it.

Sarah said: “I thought, maybe if I understand how politicians think then I’d understand why racism exists. Through the Youth Parliament, I worked with my local police force which was one of the most eye-opening experiences I have ever had.

“I remember going in with the pre-conception that the police hated me, and the first police officer I saw was a black male. I was genuinely confused. But after speaking to him and many others, I realised that the tension and frustration between black communities and the police force was due to the lack of dialogue between the two.

“I realised that many police officers were wary to enter ‘black neighbourhoods’ as they knew that they weren’t welcome. I remember talking to a police officer and asking him if and why he would be more likely to think that a black individual is a criminal in comparison to a white individual.

“I remember his answer was purely based on statistics: because of systematic racial inequality, black people are overrepresented in the criminal justice system, and so when he is patrolling a neighbourhood he is more likely to suspect the black guy walking past.

“I also remember getting really upset – to him I was just somebody that fitted the statistical stereotype – but I can’t blame him because I grew up knowing my statistics. I knew how many times more likely I was going to fail school, be criminalised, or remain working class in comparison to my white counterparts. I also lived a life trying not to fall into that statistical stereotype.

“You see, we both looked at statistics, and allowed it to shape our world view. Rather than looking at our humanity, we viewed the other based on a number.

“He assessed me based on my likeliness to be a criminal, and I saw him as another police officer hating black folk. Ignoring police brutality and systemic racism would be devaluing the black experience however, hating all police officers, for the actions of some, would also be a huge disservice to them.

“One police officer told me that we need to work today, hoping to change tomorrow, even if we’re not alive to see the change. I really understood what he meant – creating change for generations to come is vital.”

Sarah spent her days shadowing police officers and talking to them, trying to understand how and why the police acted in certain ways.

She said: “We spoke to the head office and mapped out the criminality rates in different areas. To no surprise, the criminal rate amongst the poor areas was much higher than the richer areas, and the poor areas were occupied with Black, Asian and Arab families. More police officers were told to patrol those areas, but what I was grateful for, was that they didn’t stop there.

“They asked why this may be the case, understood the disadvantages children from non-white families and from working-class backgrounds might face, as well as the temptations of criminal life.

“I didn’t do much – I mainly spoke and listened – but I sought to understand, and be understood, and I think I achieved that.”

Sarah hopes that by speaking out, she will encourage others to share their stories as well.

She said: “I hope through my story and the story of many others that you are encouraged to talk. If you have a pre-conception or a stereotype, talk to them. They might not be as scary as you think. You might even find similarities between the two of you that outweigh the differences.

“Dialogue between two communities that have tension is as important as watering flowers. It allows you to grow and expand your knowledge about one another. Knowledge leads to understanding; understanding generates respect; and from respect, love can grow.”

Find out more about how the Department of Languages and Cultures is encouraging their community to engage in conversations about race.