Tom Mowle – Renewable Electricity Support Scheme Policy Manager at the Department for Business, Energy and Industrial Strategy (BEIS) – talks to CONNECTED about his role advising the government on how to reduce greenhouse gas emissions to combat climate change. 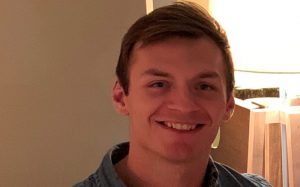 Tom studied chemistry at the University of Reading and spent most of his days either in a lab, at rugby training or “dancing terribly” in Reading University’s Student Union, and in his own words “loved every minute of it.”

“Reading is where I met lifelong friends who have been key in influencing the direction I’ve taken in my career, and life in general,” he reflected.

Unsure of what he wanted to do upon graduating, Tom embarked on a career as an intelligence analyst for the UK Government. However, whilst he found the role fascinating Tom decided he wanted to work for a cause that he believed in.

He said: “I figured climate change is probably the biggest problem humanity is facing,” so he applied for a job in renewable energy policy at BEIS where he has worked ever since.

“My job is to advise ministers on how to ensure our energy markets support the huge amount of investment we need to see in new renewable electricity plants to replace existing fossil fuel generation,” he said.

“Decarbonising our energy system means a complete transformation in the way we generate electricity. What’s more, renewables offer a way of generating power basically for free,” he explained.

“This has profound implications for the way we value, trade and use power. For example, a decarbonised power system unlocks zero carbon electric transport, and if excess power is used to produce hydrogen, we can use it to decarbonise things like heavy industry.

“If that isn’t inspiring, I don’t know what is!” he shared. “And it’s that type of work which motivates me to want to continue to work in this industry.”

Tom shares his views on the importance of working towards positive climate change action.

He said: “It’s becoming clearer and clearer that the impacts of climate change will be catastrophic to life all over the planet.

“As our generation has the opportunity to avoid the worst impacts, it feels criminal not to do so – both for poorer communities who will be hit the hardest, and the hundreds of species that will be at risk.

“In terms of personal action, I would feel a bit of a fraud if I didn’t practice what I preached so I try to do my bit and live more sustainably. I cycle much more than I used to – including to work – I’ve cut down on red meat, and I’m trying to avoid too much food waste. The next step is to insulate the house,” he shared.

Turning his thoughts to the future – both in terms of his hopes for his career and renewable electricity – Tom said:

“In our central modelling scenario at BEIS, we are aiming for Great Britain to produce most of its power from renewable sources by 2028. I’d love to continue to be part of the team that has worked so hard to reach this target.

“After that, I would love to see an energy market that uses the huge potential that technologies like renewables, battery storage and clean hydrogen can bring. If we can do that in the UK, history shows that other nations will follow and that would be one hell of a legacy,” he concluded.

Find out more about BEIS’s work, or discover more about studying chemistry at Reading.