Reading students take UPPERCUT, a new musical which tackles the social and political problems of today’s generation to the 2019 Edinburgh Fringe Festival with the help of crowdfunding donations.

Written by english literature and psychology students, Eleanor Knight and Catherine Lane, UPPERCUT follows the story of the talented, but troubled, Clio, who has three months to go until the biggest boxing match of her life. The musical explores how Clio must overcome her powerful emotions of envy, anger, grief and anxiety to have the confidence to win the fight. This heart-warming story – of overcoming obstacles to achieve your goal – flips generalised stereotypes, foregrounds mental health and emphasises the importance of loving yourself.

Growing up in a social media generation

UPPERCUT was created to showcase the anxieties and insecurities a younger generation feel in a time where social media is so prominent in people’s lives. Catherine and Eleanor’s experiences of feeling the pressure to look and act a “certain” way led them to write UPPERCUT, which aims to portray the impact these unrealistic expectations can have on girls. 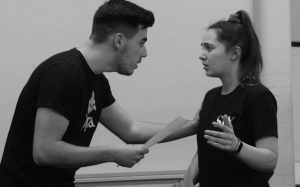 Through the protagonist, Clio, the musical reminds us not to compare ourselves to others, despite living in a society dominated by social image and popularity. With Clio also cast as an aspiring sportswoman, UPPERCUT challenges persistent sexist attitudes and stereotypes in today’s society.

By bringing mental health to the forefront, the musical aims to take its audience on a journey of self-discovery, enlightening them on the struggles faced by a current generation of teenagers and young adults.

With Eleanor and Catherine’s musical written, and their actors and actresses ready to perform, all they needed was some support to get it on the big stage. With the help of the University, a crowdfunding project was kick-started to take the performance to the 2019 Edinburgh Fringe Festival.

An incredible £3,265 was donated to the project, with the University of Reading match-funding £600. UPPERCUT later came to life in Edinburgh, with the donations enabling the team to buy props, costumes and lighting to make their musical a success. The team did a total of six performances to over 240 people and were able to put on a great show.

Since the Fringe Festival, UPPERCUT has made further appearances across the country with performances at Langley School in Norwich and Kingham Hill School in the Cotswolds. After performing the show at one of these schools, a Year 10 pupil told the performers that watching UPPERCUT made her feel like she could do anything, “like I should be proud to fight like a girl.” This response highlighted how prominently the show resonated with young people, especially with those fighting a mental health battle.

The musical has been a success in getting young people to talk about their anxieties, relationship with mental health and other important social and political issues. One theatre reviewer described UPPERCUT as a “thought-provoking piece of theatre” which is “unpretentious, funny, pertinent, moving and entertaining which deserves life beyond the Fringe.” 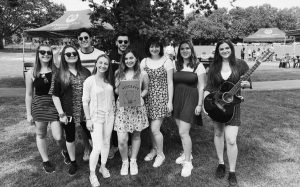 Through crowdfunding, Reading was able to support this group of students to create an influential form of art and make the most out of their time at university beyond just their studies. Without the support of Fundspace, these talented group of students may not have been able to take their show to Edinburgh at all. In the future, the group hope for UPPERCUT to be performed by, and shown to, others, particularly to teenagers who are suffering with low self-esteem or mental health issues. Overall, as Eleanor says herself, the musical has been a proud success for both these students, and for the University, in helping to tackle the issues so prominent in young people’s lives today:

“Putting on this musical is the thing I am most proud of in my life and knowing that even one person will have watched the musical and left feeling like they can face tomorrow in a positive and strong way in why we began the project in the first place.”

“There will always be good days and bad days, but UPPERCUT shows that this is ok and that everyone should embrace all of their emotions as they are part of who we are.”

Find out more about how we support students at Reading to achieve their potential through the Enabling Students campaign.