With the long-anticipated 2020 Tokyo Olympic Games starting tomorrow, CONNECTED spoke to two local, senior practitioners from the English Institute of Sport (EIS). Dr Luke Gupta and Dr Gareth Turner share with us how they have supported athletes to perform at their best during the current Olympic and Paralympic cycle. 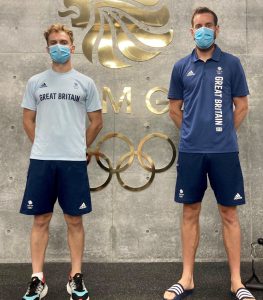 Dr Gupta and Dr Turner’s careers have both been inspired by a passion for sport. Dr Gupta played hockey at national level for several years, and having been interested by the idea of pushing the limits of human performance since his school days, he decided to combine his two passions in his future career.

He said: “Understanding how an athlete’s body responds during physical training and how you can help athletes reach their peak performance fascinates me. When I discovered that you could earn a living out of exploring that, I didn’t think twice about embarking on a degree in sport and exercise sciences at The University of Bath.”

Dr Turner said: “I decided that pursuing a degree in sports science – a topic I knew I would really enjoy studying – felt like a natural place to start when I was working out what I wanted to do.

“My interest in environmental physiology was sparked during my studies at the University of Brighton, and in 2011 I was accepted onto a studentship in collaboration with the EIS on the topic of altitude and hypoxic [oxygen reduced air] training in endurance athletes.”

Now both employed by the EIS, they spend their days helping athletes to perform at their best.

Dr Gupta told CONNECTED: “After completing a PhD in sleep and elite sport, I joined the Performance Innovation team at the EIS as a consultant.

“During my time there, I worked closely with Olympic and Paralympic sports to help them generate and implement novel ideas to tackle human science questions, and to look forward to future trends in technology to help athletes gain a competitive advantage on the world stage.

“In my current role as a physiology consultant, I help sports answer physiological questions and support them to measure, manage and maximise their athletes sleep. During the last three years, my work has been focussed on preparing athletes to perform at their best in Tokyo in hot and humid environments and after long-haul travel.”

Dr Turner began his journey at the EIS as a physiologist with British Athletics in 2014, and in 2015 he secured a job with British Rowing where he is a now senior physiologist supporting Olympic athletes like Mathilda Hodgkins-Byrne.

The postponement of the Olympics due to the pandemic has no doubt had an impact on athletes’ preparation. Dr Gupta shares how he feels about the international event going ahead.

He said: “I think it’s a really difficult situation for athletes and all those involved in supporting the high-performance system.

“It’s a moral dilemma. I’m under no illusion that we are very much still in the middle of a global pandemic, and I appreciate the challenges that some people have had to overcome to simply maintain health, wellbeing and just live their lives over the last 17 months.

“However, many athletes have spent five years working towards this one event, and many may not get the opportunity to compete at an Olympic Games ever again. As practitioners, it’s our job to help sports and their athletes perform on the world stage under all circumstances, so I feel a sense of responsibility to help make this happen.”

Dr Gupta and Dr Turner are hopeful that the strict mitigation measures that have been put in place will protect those involved. Dr Turner said: “I’m confident the organisers have done everything possible to ensure athletes, support staff, officials, and most importantly the Japanese public, are safe whilst we are in Tokyo.”

Supporting athletes to perform at their best

Dr Gupta and Dr Turner believe that Tokyo will be one of the toughest Olympics to travel to and compete at in our sporting history. They tell CONNECTED how they’ve supported athletes in the lead-up to the Olympics during the global pandemic.

Dr Turner explained: “A big part of my role as a physiologist is to ensure that the rowing team’s training is completed optimally. Rowers typically spend 75-80% of their training time on the water or on the ergometer.

“Back in March 2020 when we went into the first lockdown, athletes were unable to get out on the water for nearly six months and they had to do more running, cycling, hiking and swimming than normal.

“Since returning to our training base in Caversham, the COVID-19 restrictions have resulted in less training monitoring and fewer training camps in hot and humid climates, and we’ve had to use some environmental stressors such as hypoxic and heat to mix up their training a bit.”

Dr Gupta added: “During the summer months in Tokyo temperatures regularly soar to over 30 degrees and humidity levels of 80% are quite common. I’ve been helping sports to understand the risk this environment poses to performance and putting interventions in place to help overcome these challenges.

“I’ve also supported sports with the effects of long-haul travel. Tokyo is approximately 6,000 miles and eight time zones away from London, so I’ve designed bespoke programmes to minimise the effects of jet lag when arriving in-country, and to help athletes become acclimatised to the new time zone.

“However, the pandemic has made these challenges much more complicated to navigate. For example, the best way to acclimatise to these environments is to spend time outdoors during the day, but if athletes are unable to go outside freely on arrival it’s much harder for them to do this.”

Dr Gupta also shared the importance of the support from the wider organisation in the lead-up to the Olympic Games.

He said: “At the EIS we pride ourselves on being one of the most well-connected high-performance systems on the planet.

“We have world-class teams of physiologists, nutritionists, bio mechanists, psychologists, lifestyle practitioners, medical doctors, strength and conditioning coaches, engineers, and data scientists who all work together to support not only athletes, but coaches too.

“Supporting sports in the way that we do would not be possible without this network of diverse people – it’s a great piece of armoury going into any competition where athletes need to fight to cross the finish line.”

The final piece of the puzzle

Both Dr Gupta and Dr Turner feel incredibly privileged to be selected to go to the Olympics.

Dr Gupta said: “I’m so excited to be part of a support team that will help sports with the final piece of the puzzle – delivering a performance.

“While it’s a privilege, I’m also aware that performing is a very small part of an Olympic or Paralympic journey. As I mentioned, there is a whole team that has contributed to getting an athlete ready to compete, and 90% of the work is already done before they even step foot on a plane.”

“Much like the athletes going to the Olympics this year, it’s definitely a career defining moment for me and something I will never forget.”