The Sustainability Services team would like to extend a huge thank you to everyone who participated in this years’ travel survey. The survey was completed in January 2020, before the COVID-19 outbreak took hold in the UK.  The responses have provided some great feedback, which will help to shape the proposed travel action plans for the years ahead.

A brief summary of the key findings is provided in this blog. You can find the full results of the travel survey here.

How do staff and students travel to University?

The overall (combined staff and student) modal split for commutes to the University in 2020 is shown below. 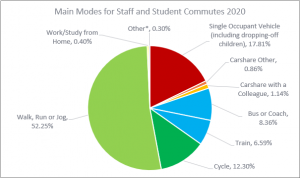 The majority of commutes to the University continue to be on foot, with single-occupancy vehicles being the second most popular mode of travel. There has been something of a concerning rise in the use of Single Occupancy Vehicles (SOV), both for staff and students.  Non-SOV travel is targeted to reach 83% (original target) – 87% (stretch target) by 2022.  Currently, the University is off track to meet both its original and stretch targets. 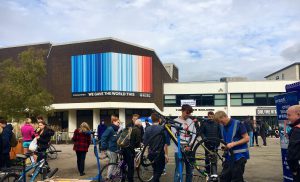 Some of the key actions identified from the survey that would benefit staff and students, and our progress towards our Travel Plan targets, include:

If you have any additional feedback / suggestions / questions / requests do let us know by emailing sustainability@reading.ac.uk.