You did it! The April Re-use challenge target has been achieved.

We set staff a target to re-use 700kg of items by the end of April. It was a big challenge, and yummy Cadbury’s Creme eggs (or sugar-free desk tidies) were offered to people who helped out.

A big thank-you to everyone who took part – you did it! The target has been achieved and you re-used a whopping 740kg of items through the University’s Warp-it portal. That’s nearly three quarters of a tonne, and it has saved staff an estimated £4,488 by avoiding buying new.

Why did we do this? Because re-use is the right thing to do – it has lots of environmental and financial benefits (find out more here). The University recognises this and has a target to improve re-use by 10% by 2021. In April 2017 we avoided disposing of 649kg of stuff by re-using it, which saved staff over £2,800 because they sourced items for free rather than having to buy it all new. So we wanted to see if we could do more than that this year. 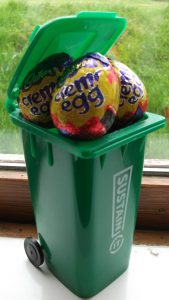